Neeva is an ad-free search engine with big ambitions and big funding. Find out more about the ex-Googlers behind Neeva, how they plan to challenge Google’s throne and what this means for SEO. 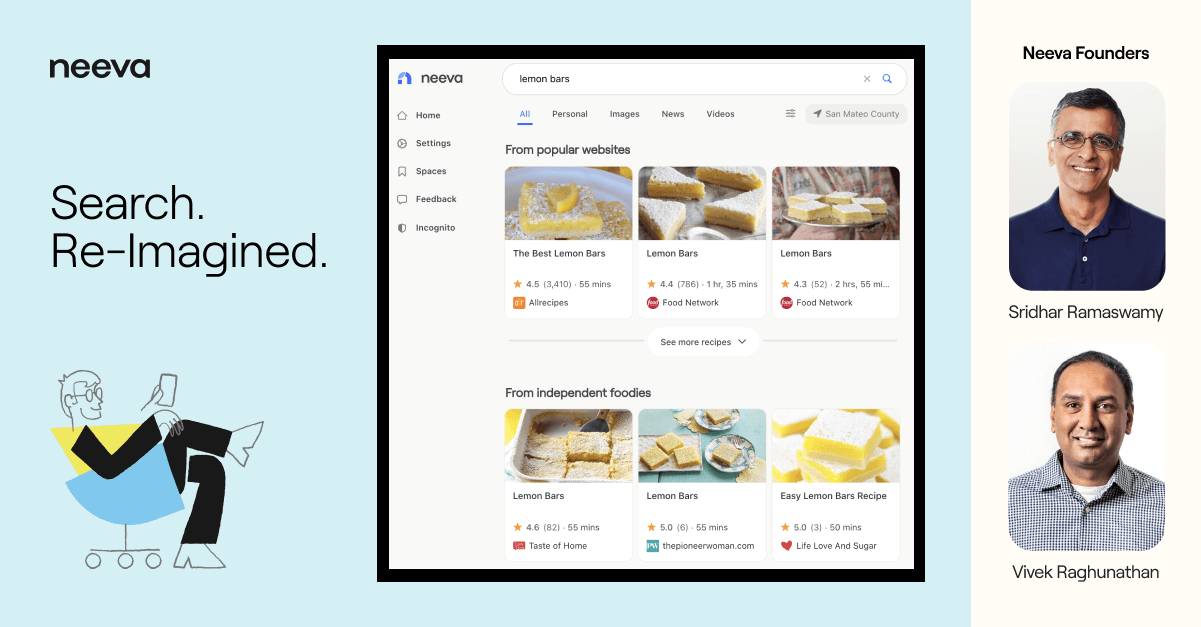 For many years marketers have claimed “SEO is dead” as ads become ever dominant on search engines. An ad-free search engine sounds like an SEOs dream, right? Imagine no longer having to faff around with paid ads and having Google churn through your ad budget quicker than you can say “click fraud”. Ad-free search engine Neeva, aims to make this dream a reality, bringing organic search back to the forefront of internet marketing.

Over the years, SEO has been pushed into the background in favour of paid ads. Google, and other platforms, have made it increasingly difficult to gain search visibility without investing in ads.

However, the SEM industry is reaching a plateau. With rising competition and increasing costs per click, search engine marketers are starting to get twitchy. For many businesses it’s becoming unsustainable to continue using paid ads as profit margins progressively shrink.

With Neeva, the only results you’ll see will be organic. They’re doing away with paid ads in favour of a more level playing field. More organic results means increased organic visibility and better SEO opportunities. SEO will inevitably be at the heart of marketing on Neeva, making monopolised search ads a thing of the past. If consumer uptake of Neeva is substantial enough and changes the search engine market, SEO will rise to the forefront of digital marketing strategy.

Neeva was founded by Sridhar Ramaswamy and Vivek Raghunathan. Both of whom have held vice presidential positions at Google.

Sridhar was once Google’s Senior Vice President of Advertising and Commerce and Vivek was once the Vice President of Monetisation at YouTube. It’s almost ironic that those in charge of monetising Google Ads are creating an ad-free search engine, but it’s sure to bring unparalleled experience to the table.

On top of that, their team features a number of ex-Googlers, including Udi Manber, Margo Georgiadis, Darin Fisher and Bill Coughran, giving them a competitive edge for challenging Google’s crown.

Their investors are no strangers to growing brands either, with LinkedIn Co-Founder Reid Hoffman joining their ranks, alongside enterprise tech investor Asheem Chandna of Greylock Partners.

With a star-studded team like this, should Google be worried? Most definitely. In recent years a number of opponents, such as DuckDuckGo, have arisen to challenge Google, but none of them have quite hit the mark. Neeva is the latest in a long line of challengers, but shows great promise and a huge amount of investment funding to boot.

How is Neeva being funded?

Neeva has around $77.5 million funding in total, $40 million of which is recent Series B funding to accelerate their growth.

To put that into perspective, that’s $64.5 million more than DuckDuckGo has had in the entire lifetime of the company. As of February 2021, DuckDuckGo has managed to claw a meagre 2.24% of market share, but Neeva, with its extra funding and an elite team at its helm, could grasp considerably more.

How does Neeva make money?

You may be wondering how Neeva will make money when their search engine is ad-free. After all, bandwidth doesn’t grow on trees. Like Netflix, Spotify and so many more, Neeva will charge a subscription fee to use their services.

The exact fee isn’t yet known, but it’s expected to be $5 – $10 a month. That’s about the same as a few cups of coffee. The question is, will people ditch the coffee for a Neeva subscription?

To separate themselves from the competition, Neeva will need to provide something more than privacy and being ad-free. They’ll have to give users an experience that surpasses their competitors.

Is Neeva the future of search?

It could be. The challenge for Neeva will be how they can encourage people to pay this subscription fee. Will the selling point be substantial enough to get people to switch from Google? Are search ads so annoying that users would pay to go ad-free? The answers to these questions remain to be seen, but it’s certainly an exciting time for search.

You can join the waitlist to become an early Neeva tester if you’d like to try it. I’ll see you there.

The Witney SEO Guy is an SEO Consultant experienced in helping businesses be more visible on search engines and convert more website traffic.